The Premier League season is some six weeks old now, and that is music to the ears of statisticians as they look to build convincing arguments for and against certain assertions made so far by pundits and punters alike.

Are Manchester City going to walk to the title? Are Everton really that good? Has Leicester’s bubble burst? Are Sunderland doomed for relegation already?

These questions are rhetorical, in some cases, as six weeks of data simply isn’t enough to deliver a statement of certainty either way. But using our Shots on Target Ratio (SOTR) model, we are able to make certain assumptions that should help punters on their journey to profit.

The SOTR metric is dead easy to work out: it is merely shots on target for divided by shots on target against, with the resulting figure ultimately determining how likely a team is to score/concede at any given time. The higher the number, the more ‘efficient’ a side is, and anything below 1.00 shows that the team in question is yielding more shots on target than they are creating; not an ideal strategy for long term success.

Here is how the SOTR table is looking after Gameweek 6 (note that this does not include the Burnley vs Watford game): 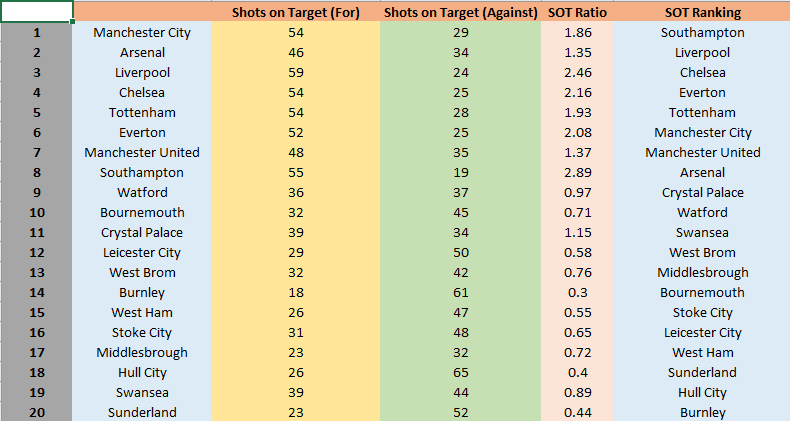 The teams are displayed in descending order as to their league position, with the key SOTR figure published in the pink column on the right hand side. You will notice some interesting ‘outliers’, which we will discuss now:

Chelsea have been ‘unlucky’

With an SOTR rating of 2.58, only Everton have enjoyed a more shot-friendly start to the campaign than Chelsea.

The reason we call them unlucky, not in any figurative sense, is because they have concede nine goals from twelve shots on target; that really is an exceptionally high conversion rate.

Why is this so? It could be bad luck in every sense of the word, or quite possibly poor defending that is gifting their opponents a higher quality of shot on target, i.e. one from six yards out rather than a speculative long range effort.

Either way, Antonio Conte will need to look at that, but what we can tell the cheeky Italian is that if his side keep their SOTR rating as high as this then they will finish higher than their current eighth place in the table.

Yes, Everton really are that good

Everton’s 0-1 loss to Bournemouth highlights the limitations of the SOTR model, in that it simply cannot account for a bad day at the office.

The Toffees have been exceptional up until now, and their SOTR has reflected their excellent league standing. But they simply didn’t turn up against the Cherries, and even though their match rating of 2.00 should be enough to get the job done it only takes on shot on target to score; as Junior Stanislas found when his long-range effort whistled into the top corner.

The crumb of comfort for Everton fans is that if they continue to dominate matches in terms of shots on target, they should finish in the upper echelons of the division.

Expect the Saints to march on

Southampton’s 3-0 win over West Ham on Sunday was easy to predict using SOTR data, and as long as they performed how they had done up until that point they were always likely to enjoy a comfortable victory over the Hammers.

So it proved, and only Everton have fired more shots on target than the Saints this term. If Claude Puel’s side can maintain their SOTR of 2.43, you would wager that they will comfortably finish inside the Premier League’s top six.

We have sympathy for Slavan Bilic; he has been beset by injuries so far this term, and has had to help his side adjust to new surroundings after leaving their legendary Boleyn Ground home.

But their current SOTR of 0.44 is relegation fodder, make no mistake, and no side has yielded more shots on target than the Hammers; a stat which reflects the fact that they have conceded more goals than any other side this term.

That’s not ‘bad luck’ or individual errors, that is a reflection of a team unable to stop their opponents from front to back.

It’s early days of course, but that is a worrying trend for the Irons faithful, and one that needs to be eradicated if their side is to avoid a protracted relegation battle.