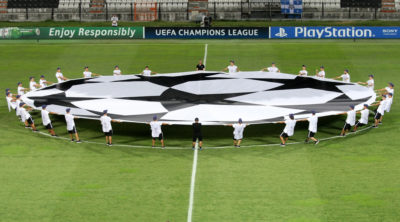 Now the Christmas and new year festivities are well behind us and Dry January is a thing of the past, we can start to get stuck into the good stuff again – the return of the Champions League is a timely and welcome one.

European football’s premier competition is back this week, with the first half of the last 16 playing their first legs on Tuesday/Wednesday and the second half taking their bow in the knockout phase of the tournament next week.

The four fixtures that punters can sink their teeth into this week are humdingers, with three English sides facing away days of varying degrees of difficulty as well as a fascinating clash between Real Madrid and PSG at the Bernabeu.

Here’s your guide to the first set of Champions League last 16 fixtures: what can we expect and where is the smart money going?

Respect should be shown to Basel, who on their way to qualifying in second from Group A beat Manchester United and did the double over Benfica.

What is interesting though is that Swiss football has a winter break from December until the end of January, and so Basel have only just started playing competitive matches again – they lost their first domestic match to the footballing giants that are Lugano after the rest period.

Pep Guardiola gave his Manchester City players four days off last week to help revitalise weary limbs, and the pay-off from that was evident in his side’s 5-1 demolition of Leicester on Saturday; the likes of Kevin de Bruyne and Sergio Aguero were back firing on all cylinders.

The question now is how can we make money betting on this fixture? You’ll do well to back City at odds of 1/2, and even that as a price doesn’t necessarily appeal given that Basel are a solid enough side on home soil.

What typically happens when they host a elite-level side on their own turf is that they get beaten….but only just. They lost 0-1 to Real Madrid in 2014/15 and 1-2 to PSG in 2016/17, so let’s take the 8/11 about Man City with a -1.25 Asian Handicap; in this scenario our bet wins if City triumph by two or more goals, and half our stake is refunded if they win by one.

Here’s an interesting statistic: Juventus have conceded one goal in their last 16 games!

But those were mostly Serie A fixtures, a division which the Old Lady dominate, and when we look back to their Champions League group offerings we note the 0-3 humbling they suffered at the Nou Camp plus the concession of goals home and away against Sporting Lisbon.

So Tottenham fans, don’t tear up your ticket to Turin just yet….

Spurs should be at full strength for the trip to Italy, with Toby Alderweireld and Danny Rose back from injury. Contrast that to Juventus, who could be without Blaise Matuidi, Benedikt Howedes, Juan Cuadrado and Andrea Barzagli, while Paulo Dybala hasn’t kicked a ball in anger since early January.

Tottenham, you may recall, earned a 1-1 draw at the Bernabeu in the group phase, and quite frankly we find their quotes of 7/2 here ridiculous. This will surely be a low-scoring contest, but that plays into Spurs’ hands as they can sneak an away goal courtesy of Kane, Son, Eriksen and co. Punters can back Under 2.5 Goals at 8/13 – fair enough – but arguably more enticing is the Tottenham/Draw Double Chance at 5/6.

Wednesday is Valentines Day, and punters will surely be feeling the love about the 11/8 available here on a Liverpool victory.

Porto qualified from a tough Group G in second place, but the key takeaway point from a betting perspective is that they conceded more goals than 15 of the last 16 teams in the competition.

Liverpool’s front three requires no introduction, and as long as they can keep things tight at the other end then there is no reason why the Reds can’t return from Portugal with at least one away goal and, quite probably, a handy lead.

Barring one aberration in Sevilla, Liverpool were actually pretty good in their group campaign, and they should have too much firepower for their hosts here.

What a cracker this could turn out to be! Real Madrid’s season has not gone how they would have wanted it to, but even so with their galaxy of attacking stars they are still a threat to anybody – especially at their imposing Bernabeu home.

PSG, meanwhile, spent a barrow-load of cash in the summer but have so far made it work for them: they are cruising to the Ligue 1 title and, barring the 1-3 defeat in Munich to Bayern, easily topped Group B.

So here’s the thing. We know that the standard of French football isn’t that great, and so PSG’s toughest test this season so far was that trip to Munich; which they lost convincingly. Real, fourth in La Liga, have vast Champions League experience and are in good form too: their last four league matches have ended 7-1, 4-1, 2-2 and 5-2.

The goals markets here are untouchable, so try Real Madrid in the Draw No Bet market at 17/20: betting against them on home soil would be fraught with risk.