Lies, damned lies and statistics: those were the words of former Prime Minister Benjamin Disraeli, and while this isn’t the context he uttered them in that is a phrase that can adeptly be attributed to modern football.

So-called ‘expert’ pundits offer us their pearls of wisdom every week on analysis-based TV shows and in the papers, but is what they are saying actually true? Do the likes of Alan Shearer and Ian Wright ever get challenged in their love-in with Gary Lineker on Match of the Day?

Statistics aren’t every football fan’s cup of tea, but they are damn more important to the beautiful game than the hackneyed opinions of disgruntled former players. So what do the stats tell us about the state of the Premier League so far this season?

Manchester City have accumulated more points than any other side on home soil this term – a happy side-effect of going 13 unbeaten.

Being solid at home is ultimately what has propelled Everton up the table (W7 D2 L4), and was the cornerstone of Burnley’s success last term.

But can punters take on any sides on home soil? West Brom, Newcastle and Watford have taken just 13 points from a possible 36 on their own patch, so arguably that trio can be targeted.

Quite why Burnley are doing so well (W4 D6 L3) away from home this term is a mystery, but clearly their organisation and shape under Sean Dyche is a huge factor – why hasn’t he been offered ‘bigger’ jobs yet?

Even with a conservative new manager, punters have to be ready to take on Stoke when they are playing away from home. A formline of W1 D3 L8 tells much of the story, but their ‘goals conceded’ shows us they concede at a rate of 2.50 per game; a terrifying statistic that will need to be addressed pronto!

The two anomalies, arguably, are Bournemouth and Newcastle, who are next on the list with both averaging more than four shots on target per game.

If you concede lots of shots on target, then the chances are that you will concede lots of goals too. So Stoke’s status as the team to ship the most Premier League goals this term is confirmed by a shots on target yielded count of 5.32 – the highest in the division. They are followed by Swansea (5.20), Everton (4.96) and Brighton (4.72).

As for the goals stats, the league table offers all you need to know here, although the official Premier League website has some interesting data too. Their ‘Big Chances Missed’ metric is an interesting one: a ‘big chance’ is essentially a shot from the centre of the penalty area that ‘should’ be scored. It’s interesting because Manchester City have the highest big chance missed ratio, and that is perhaps a side-effect of creating so many chances.

But Stoke are eighth in this metric, which suggests they are creating chances but not taking them. Could Badou Ndiaye be the man to change that? If Paul Lambert can sort their defence out, the Potteries side should be comfortably good enough to stay up.

This graphic, from the excellent WhoScored, is self-explanatory regarding how teams score their goals: 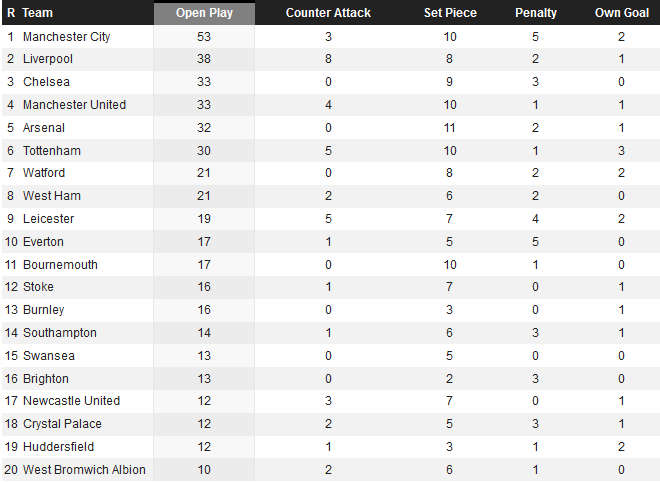 Everton are officially the dirtiest team in the Premier League, committing an average of 12.64 fouls every 90 minutes. How much blame Big Sam Allardyce can take for that is anybody’s guess….

The top three teams in the ‘fouls committed by opposition’ category might shock you. You might think that Manchester City, Arsenal or Liverpool are the most fouled, given their galaxy of attacking talent and the intention of opposing players to ‘get stuck in’ on them.

Perhaps the West Ham players often find themselves in retaliatory mode then, as they are the team to receive the most yellow cards this term (55). Fouling powerhouses West Brom are second (49), with Crystal Palace in third (47).

Watford (four) have received the most red cars, with Chelsea, Leicester and Huddersfield having three players each dismissed so far.

Is it any big surprise that five of the top six in the league table also boast the best ‘corners for’ count?

And keep an eye out for Watford, whose games this term average more than ten corners every week!