With the World Cup taking centre stage this summer on football’s wider consciousness, the shenanigans of the transfer window have largely taken a back seat.

There have been some major moves of course, including Ronaldo’s surprise switch to Juventus, but by and large it has been a window devoid of shocks and big money signings.

But one club who have been doing big business is Wolverhampton Wanderers, the Premier League new boys who continue to take advantage of their ‘special relationship’ with super-agent to the stars, Jorge Mendes.

He has been the middle man between the West Midlanders and a number of clubs/players across the continent, and their Portuguese connection looks set to be extended with the £5 million signing of Joao Moutinho, the third most-capped Portugal international of all time and Euro 2016 winner.

The 31-year-old may not have the legs in midfield that he used to, but his calmness in possession and ability to read the game could prove crucial in their return to the top flight.

Wolves fans, and punters, have a similar question on their minds: just how far can the boys in gold go this season?

The connection between Mendes and the some outstanding players from across Portugal and beyond is a huge part, but only part, of the reason for Wolves’ success.

You still need a canny manager to find the right balance for the players brought in, and Nuno Espirito Santo has devised a system that gets the best out of his attacking talents without diminishing the defensive responsibility that saw the Molineux based outfit record the joint best goals-against record in their triumphant run to the Championship title.

This is a side based on sound defensive principles, with a solid back three aided by a pair of wing backs in Matt Doherty and Barry Douglas who aren’t afraid to much in defensively. In front of the defence is a midfield duo, usually Ruben Neves and Romain Saiss – Moutinho might have something to say about that – that doesn’t stray too far from their post.

Then the front three are allowed to play, and while the likes of Helder Costa and Ivan Cavaleiro did sterling work in their side’s promotion bid, you wonder how much they will feature if Mendes and Santo have even more new signings up their sleeves.

It wasn’t all that long ago that Portugal were crowned European champions.

Time has a funny way of shining a harsh light on such achievements, and you only need to look at their tepid efforts at the World Cup – and the demise of Renato Sanches, amongst others – to know that there was an element of luck in that victory.

But even so, Wolves have capitalised on their Portuguese connection by bringing in Rui Patricio, the reliable shot stopper, and presumably Moutinho, who looks set to sign on the dotted line in the coming days.

Both were key figures in that triumph in France, and their undoubted experience on the big stage will help a squad for whom this will be their first taste of top flight football.

Here’s how the men in gold-and-black could line up with Moutinho in their midst: 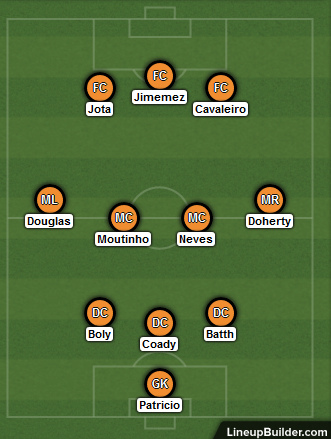 So How High Can Wolves Go?

It’s always very difficult to compare Premier League seasons – you can go from a Leicester City title winning campaign to Manchester City obliterating pretty much everyone in the space of 12 months.

But a look at the 2017/18 standings suggests that Wolves can benefit from the momentum a promotion campaign generates, and when you factor into the mix they have several Champions League standard players the future looks rosy.

The bookies have them at 12/1 to finish inside the top six, and to be fair that does look like something of a longshot: the West Midlanders would have to usurp an Arsenal, Chelsea or a Tottenham to achieve such a feat you’d fancy.

More of interest to punters will be the 11/10 on them finishing inside the top-10. Outside of the big six, based on the 2017/18 table that would require Wolves to finish above Burnley, Newcastle, Leicester or Everton.

Can Burnley repeat their heroics for a third consecutive season? Their budget remains frightfully low for the top flight, and you wonder if the Clarets will hit a brick wall at some point in terms of their progress.

And Leicester, who won just one of their last seven games and have since sold their best player in Riyad Mahrez, surely must be vulnerable in this market.

So perhaps a top-half finish is available to Wolves, and that would be an excellent result for a side whose ‘project’ you suspect has plenty of success left in the offing.