The over-hyped and bloated Transfer Deadline Day – seriously, have Sky Sports got nothing better to do? – has been and gone, and once again it was a largely inactive affair.

That said, there was a handful of standout moments that captured the imagination; not east David Luiz’s surprise return to Stamford Bridge.

So how will the key Deadline Day signings impact upon the rest of the Premier League campaign?

Perhaps the biggest shock of Transfer Deadline Day was David Luiz’s return to Chelsea from PSG. The Brazilian had been flogged to the French capital back in 2014 for a not inconsiderable £50m, so his return for a cool £34m is something of a surprise.

Most English football fans will remember Luiz as the crazy-haired defender who was prone to some absolute howlers, but as his stats for PSG last season prove, he has matured into an accomplished defender (via Who Scored):

Chelsea’s former rock solid defence has been crying out for reinforcements in the past year or so, and Antonio Conte has finally bitten the bullet. Whether this transfer means he will switch to his preferred back three is anybody’s guess, but if we compare and contrast Luiz to Gary Cahill it is clear that the Brazilian is a different type of centre back to the Englishman, and he will add a touch of class to compliment Cahill’s rugged stylings (via Who Scored):

To Luiz the Blues can add Marcos Alonso, a former Bolton left back who has improved beyond all recognition since joining Fiorentina.

The signing of Alonso means that Conte can switch Cesar Azpilicueta to his favoured right hand side, or switch to the three centre backs, two wing backs system he deployed with Italy.

The Spaniard will add a naturally left-sided touch of class defensively, but he is also excellent going forward; another handy string to his bow (via Who Scored): 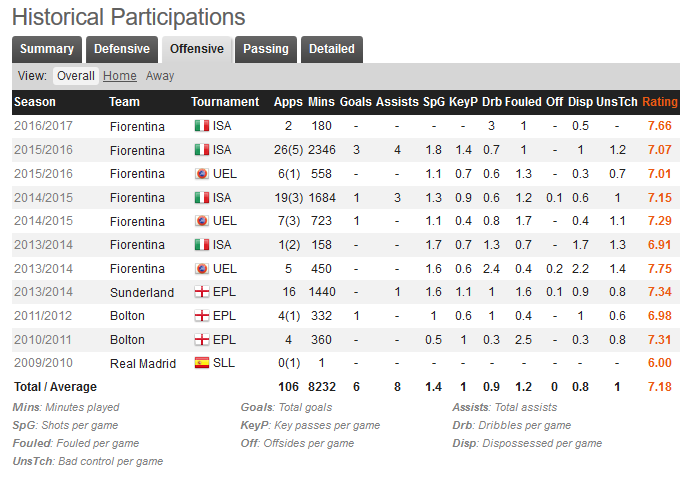 Alonso and Luiz could prove to be the missing links in the Chelsea jigsaw, and now they looks on to finish inside the Premier League’s top four: which is available at 4/11 with most bookmakers.

Arsenal have long been crying out for a central defender to partner Laurent Koscielny, and they have splashed the cash on German international Mustafi in the hope that he is the long-term solution.

He is big enough (184cm) and brutish enough to cope with the physical demands of the English top flight, and he is just about fleet of foot enough to keep pace with the division’s livelier forwards too.

At 24 his age profile is good – defenders usually peak in their mid-to-late 20s, so time is on his side, and with his German and Spanish background he is comfortable on the ball too. So Mustafi ticks all of the right boxes for the Gunners; and it could be enough to secure them fourth spot – still available at a generous 10/11.

This was perhaps the most baffling transfer of the window. Why Spurs need Sissoko is anybody’s guess; he doesn’t really fit into their 4-2-3-1 system as he isn’t defence-minded enough to play alongside Eric Dier, nor is he swashbuckling enough to play just behind Harry Kane in the number ten role.

The Frenchman’s best hope is a slot on the right hand side of the three, but even then he would have to displace Erik Lamela and/or Christian Eriksson, which seems unlikely.

Given Sissoko’s complete anonymity in Newcastle’s demise last term, this price tag is truly baffling, and comes on the back of a couple of decent performances for his country at Euro 2016. But the fact Spurs couldn’t find a better, more motivated player at half the price is somewhat surprising.

Leicester have been tracking the former Sporting Lisbon striker since Nigel Pearson’s reign of terror, and so they will be delighted to finally get their man.

Slimani came to prominence as Algeria’s bustling frontman at World Cup ’14, and his goal record since joining the Portuguese outfit is astonishing: 57 in 109 appearances. Here’s a guy who knows where the net is.

His signing would indicate a change of style for the Foxes – or at least a nod to a Plan B – as Slimani stands 6ft 2in tall, and he is more of a physical presence than somebody who can run in behind a la Jamie Vardy. So Claudio Ranieri may be planning a two-pronged assault, or he may instead opt to use Slimani from the bench in a more direct style.

Either way, his signing won’t impact too much upon the Foxes’ chances, but at least they have somebody now to take the goal burden off Vardy and Riyad Mahrez. At 1/2 to finish in the top ten, they look a decent bet.