The Football League ladder is starting to take shape in 2017/18, with the early pretenders fading away and the classier acts making their presence known at the top of the table. At the other end, there are a few sides in the Championship, League 1 and League 2 for whom avoiding relegation looks set to be a monumental challenge already.

As ever on Fridays, we like to open up our crate of goodies and see what’s inside, and this week we’re going to present to you one statistical betting model you probably won’t know about and one you might – but definitely should.

For the Championship, we have our own shot efficiency model (explained below), and for Leagues 1 and 2 we offer up Expected Goals (xG) happiness with current form guides.

Let’s see if these present any interesting pointers for punters this weekend:

Presented below is the data resulting from our own shot efficiency model for the Championship teams, and while at first glance you might be thinking ‘what the heck is this?’ all is revealed below: 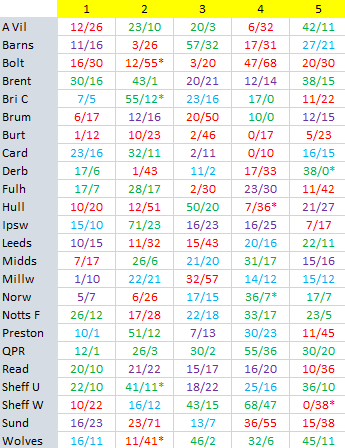 For each match played we capture where shots on target are taken from, and assign a basic score based upon that. It is a very crude version of Expected Goals really; a shot from inside the danger zone (imagine the six-yard box is extended lengthways to the penalty spot) earns 10 points, one from inside the 18-yard area but outside of the danger zone earns 5 points, and a shot on target from outside the penalty area earns 1 point.

These points totals are then tallied up to give an overall flavour of the game.

As far as the visual presentation above is concerned, these scores are listed next to the teams (you can see we have their last five games accounted for), and the colour system is easy to understand:

Matches highlighted by an asterix (*) indicate where a sending off is likely to have caused an unnatural set of data.

So what do we learn from the model? Instantly, two teams stand out: QPR and Burton….albeit for different reasons.

QPR have enjoyed total shot supremacy in each of their last five matches, and while their form is mixed (W0 D4 L1) we can assume that if they continue along this path they will soon start to win plenty more games in the near future. Saturday they host Wolves, who the model suggests are also in a rich vein of form.

And then there’s poor old Burton, who have earned just 18 points in their last five outings as far as our model is concerned – by far the worst in the Championship. Ipswich travel to Burton on Saturday, and at 17/10 they have to be worth a small flutter.

Feel free to use the model to pick out your own Championship wagers.

Our League 1 model is much more straightforward to understand: using the popular Expected Goals data, we have created a form map that appears as follows: 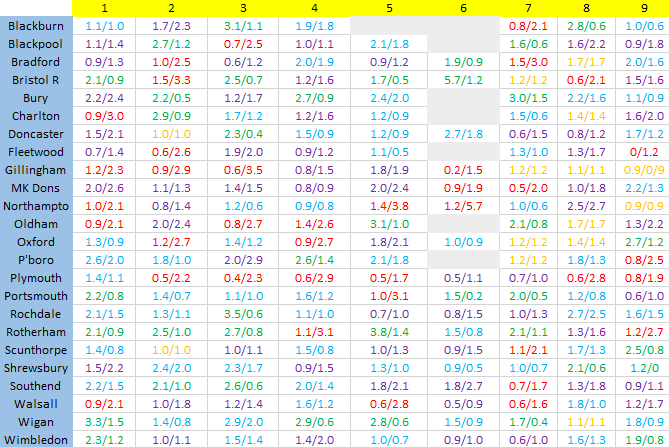 The presentation of these numbers is similar to that of our own shot efficiency model:

The last nine gameweeks are revealed above, and show two high-flying sides deserving of their positions: Wigan and Shrewsbury.

We also note that Plymouth are struggling, and given their own form Rochdale are surely worth a flutter at 6/5 on the south coast. 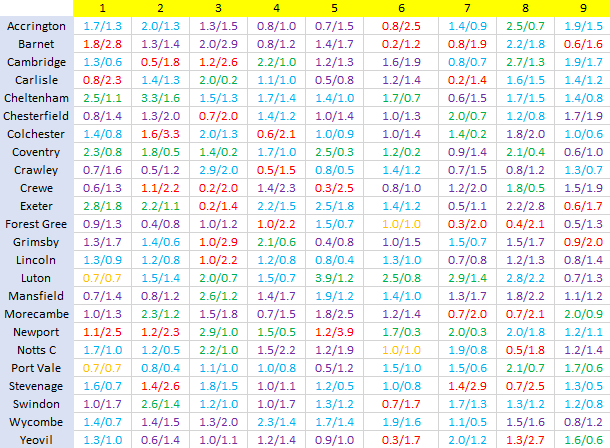 So what does the data tell us? Port Vale are certainly on a roll under new boss Neil Aspin, enjoying chance creation supremacy in seven of their last eight starts. Their opponents on Saturday, Swindon, are going nicely too, so expect a closely-fought affair.

Little purple patches of form from Accrington (11/10), Cambridge (17/10) and Newport (21/10) make them interesting value this weekend at odds-against prices.