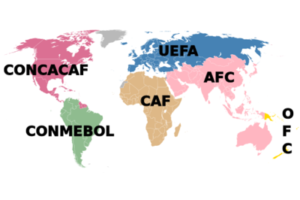 It is a hectic long weekend of World Cup 2018 qualifiers across the globe. The European section of qualification has just two rounds of matches to come, followed by the dreaded play-offs, and there are still plenty of places in Russia up for grabs.

Over in Australasia, Syria and Australia will duke it out for the right to progress to the inter-confederation play-off, while the identity of the five African nations who will take their place in next summer’s tournament are already known.

In South America, which is always one of the most tantalising qualification processes, there are two rounds of qualifiers and an incredible eight teams that can still qualify for Russia either automatically or through the play-off system.

Pleasingly for them, there are eight nations who are already assured of their spots in Russia, and so they can sit back, relax and watch as the pressure of qualifying for the world’s greatest sporting spectacle intensifies.

Here’s a rundown of the runners and riders already qualified for World Cup 2018, and a look at those set to join them next summer.

The beauty of hosting a World Cup is that, along with the cash splashed by tourists for the three weeks or so of tournament play, you actually automatically qualify for the competition.

That’s good news for Russia, who will take their place in the competition by default. Very lucky, considering how poor they were at Euro 2016.

Actually doing the hard work and qualifying on the pitch are Brazil, who have topped the South American section of qualifying, Mexico – who did likewise in North America, and the best four teams from the Asian Football Confederation section: Iran, Japan, South Korea and Saudi Arabia.

Belgium are the only European team to have so far qualified mathematically, and they will join the five African nations who are safely through: Tunisia, Nigeria, Ivory Coast, Burkina Faso and Egypt.

The European section of World Cup 2018 culminates in the next week or so, and matters at hand will be decided once and for all.

Some of the groups, like Groups A, E and I, are wide open, and yet others are likely to be settled comfortably enough. In Group B, the winner of Switzerland vs Portugal on October 10 will take top spot, with the Swiss benefiting from a draw as they are three points clear at the top.

Reigning champions Germany need a point against either Northern Ireland (away) or Azerbaijan (home) to book their place, as do England against Slovenia (home) or Lithuania (away).

Scotland won’t have given up on joining Northern Ireland in the play-offs, and they are likely to be joined by another home nation with Wales and the Republic of Ireland locked in a tense battle in Group D.

One of the worst-case scenarios is that they will draw Italy in those play-offs, with Spain set to top Group G. The draw for the play-off round takes place on October 17.

This is the South American section, and as things stand Argentine sit outside the automatic qualification places on goal difference to Peru.

But there are two rounds of qualifiers to go, and the two meet on October 5 in what is essentially an all-or-nothing contest.

Uruguay realistically need only a point at home against Bolivia to qualify – there should be no problems there, while Colombia will hope to join Brazil at next summer’s showpiece by beating Paraguay on home side. There may not be a place in Russia for Copa America champions Chile as things stand, with the fifth place team taking their place in the inter-confederation play-offs.

Mexico have booked their place in Russia from the North American section, and they are set to be joined by Costa Rica, who need a solitary point from their last two games to qualify.

It will then be a three-way dance between Panama, the USA and Honduras for the two remaining qualification places. Third place in the group heads to Russia automatically, fourth place goes into the inter-confederation play-off process.

The USA have the World Cup pedigree and home advantage in their head-to-head clash with Panama on October 6, so they go down as a strong favourite to qualify.

The last two spots go to the winners of the two inter-confederation play-off matches. These are straight knockout fixtures played over two legs, with New Zealand set to meet the fifth place team in CONMEBOL and the winner of the Syria vs Australia AFC play-off battling the fourth place team in CONCACAF.