Northern Ireland’s hearts were broken in their 0-1 aggregate defeat to Switzerland in their World Cup 2018 play-off, and now their Southern neighbours will be hoping the same fate does not befall them on Tuesday.

The Republic of Ireland host Denmark in Dublin, and after claiming a 0-0 draw in the reverse fixture Martin O’Neill’s side must fancy their chances of qualifying for the Russian extravaganza next summer.

Mind you, their confidence is not shared by the bookmakers. The sportsbooks have made them a fractional outsider at odds of 21/10, with Denmark poised at 9/5. It’s a slightly strange scenario, but one perhaps created by the notion that an away goal for the Scandinavians will probably be curtains for the Irish.

Denmark dominated the first leg with some 72% possession and five shots on target, and Ireland arguably had Darren Randolph to thank for keeping them in the tie.

But in the tie they are, and in front of a passionate home faithful they will be a particularly tough nut to crack.

Their style of play came in for much criticism in the reverse fixture, but you can’t really blame O’Neill and assistant Roy Keane: they just wanted to keep their team in the mix ahead of the trip to the AVIVA Stadium.

And besides: the Republic of Ireland bring so much to the table. From giant-killings to video nasties that would become cult sensations, here’s a reminder of their best bits while competing in major competitions:

Super Ray Sets the Irish on Their Way

Picture the scene: it’s World Cup ’94, it’s Ireland vs Italy in front of 50,000 passionate fans (many of them Irish) in temperatures tickling 28° in the USA. It’s hot, it’s humid, and it’s a match with plenty riding on it.

Naturally, the Republic weren’t expected to get much from the game against the silky-smooth Italians, who in many quarters were seen as the tournament favourites alongside Brazil (ironically, they would go on to meet in the final).

But wow, what a start the Irish got when little Ray Houghton, so often an underappreciated player in England for Liverpool, picked up a loose header on the edge of the Italians’ box and let fly.

The ball seemed to levitate for an eternity before floating over the keeper and plopping down in the back of the net. Those in the stadium dressed in green went predictably wild.

That goal secured Ireland a 1-0 win; a victory that would ultimately see them through to the knockout stages of World Cup ’94, where they succumbed 0-2 to Holland in the last 16.

Nevertheless, Houghton’s goal will be etched onto the memory of Irish fans wherever they may be on Tuesday evening.

It’s one of those clips that gets played on football mishap-style clip shows around the globe, and in truth it never gets any less funny with the passing of time.

Let’s head back to World Cup ’94, and this time Ireland are taking on Mexico in another group match. It’s being played in searing heat in California, and with his side 0-2 down and struggling to make in-roads against the Mexicans the Irish manager, Jack Charlton, is starting to get a little hot under the collar.

He attempts to make a substitution; bringing on Liverpool and Tranmere man John Aldridge to add some dynamism to his front line. But in a bizarre turn of events you simply would not see in the modern games, ‘Aldo’ was unable to take to the field due to a meddling FIFA admin assistant and an errant piece of paper, as explained in the video below.

At that point, it’s fair to say that Aldridge and Big Jack rather lost their tempers….

Getting One Over on the English

One record that can never be taken away from the Republic of Ireland is surely one of their most proud: they were the first non-UK nation ever to beat England on English soil.

That fateful day came back in 1949, when they were asked to take on the Three Lions in a friendly at Goodison Park to help them prepare for the upcoming World Cup.

What followed was not in the script as goals from Con Martin and Peter Farrell secured the Irish a legendary victory and set them on the road to improved performances in the years that followed.

Getting One Over on the English….Again 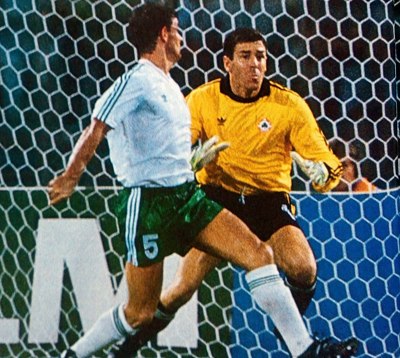 It would be remiss to label the Republic of Ireland as England’s bogey team – the Three Lions hold a 5-2 head-to-head lead, with a whopping nine draws as well.

But on occasion the boys from the Emerald Isle have gotten the better of their rivals, and alongside the famous win described above sit this 1-0 triumph some 40 years later.

It was at Euro 1988, to be precise, where Ray Houghton gave the green army a sixth minute lead.

England laid siege to the Ireland goal, but one man stood in their way: Pat Bonner, the outstanding goalkeeper who rescued his side time and again with some fantastic saves.